A brief primer on recent assaults on reproductive justice in Georgia, Alabama and Ohio 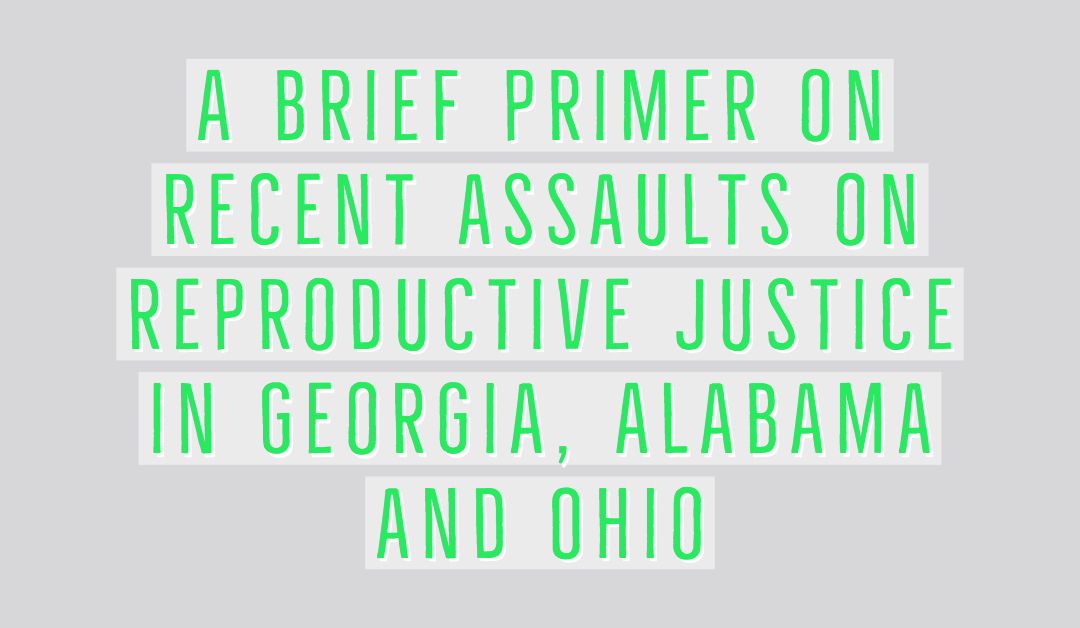 I recently wrote up this brief primer on some of the horrific laws that are being proposed and being signed into law around the country, for a secret local feminist activist Facebook group I’m a part of, and wanted to share it here for all Feminist Oasis members and folks interested in feminist issues.

Disclaimer: this is a very not-comprehensive write-up, informed by reading a variety of articles, mostly linked below. If you see anything that is factually inaccurate, please let me know either by commenting here or email me directly at crystal@feministoasis.com. I hope this information helps you at least begin to wrap your mind around these horrific assualts. This is a feminist oasis, but there can be no oasis without action and vigilance — which is why we take action! Members receive a bi-monthly action plan with a variety of personal, business, community and governement actions to do. Please contact us if you have ideas for specific actions to include in our next Action Plan. Thank you!

A brief primer regarding assaults on reproductive justice in Georgia, Alabama and Ohio

Our current administration is aggressively pursuing their goal of overturning Roe v Wade. I’ve seen a lot of outrage and information circulating online around these horrifying laws, so I thought I’d get the conversation going with some facts that I’ve been able to glean in reading about these laws.

Read about this law in the Washington Post: “Georgia governor signs ‘heartbeat bill,’ giving the state one of the most restrictive abortion laws in the nation”

Again, reported in the Washington Post: “A sponsor of an Ohio abortion bill thinks you can reimplant ectopic pregnancies. You can’t.”

I will leave you with this twitter thread of places in Georgia that are currently still providing reproductive health services (remember the new Georgia ban doesn’t take effect until 2020) and could use our moral, activist and financial support right now.

Stay strong, feminists! If anyone has a specific action or mobilization idea, please reach out — leave a comment below or contact us privately. I have some ideas… please add yours below, too!