Feminism is empty without intersectionality and action

Below is an op-ed written by Feminist Oasis founder Crystal Paradis, published on 7/29/18:

The word “feminist” is on my business card. Not as a title I’m using to define myself, but because it’s in the name of my business. Even with its recent rise to acceptance in mainstream popular culture, the word “feminist” still prompts startled reactions most times I hand someone my card. Since I’m so frequently reminded of the baggage of this word, I’m also increasingly aware of my responsibility to define, and demonstrate by my actions, what I mean when I use the word “feminist.”

Feminist theorist bell hooks (no, the lowercase of her name isn’t a typo – she consciously declines to capitalize her name in favor of putting the emphasis on her ideas) defines feminism as “a movement to end sexism, sexist exploitation and oppression.” Defining feminism as a commitment to end oppression is notable in that it is not (as it is sometimes misperceived to be) seeking to reverse it. Taking power from one group and giving it to another doesn’t solve the problem – it simply perpetuates domination and systemic injustice.

Feminist poet Audre Lorde wrote, “the master’s tools will never dismantle the master’s house. They may allow us temporarily to beat him at his own game, but they will never enable us to bring about genuine change.” The goal of a hooks and Lorde kind of feminist movement is to dismantle systemic power structures altogether in favor of equity for everyone – all genders, all identities. 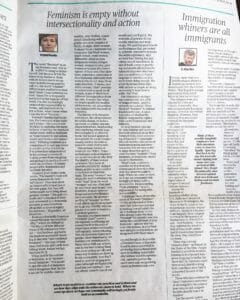 Professor Kimberlé Crenshaw coined the term “intersectionality,” which she defined as “the theory of how different types of discrimination interact.” This has been applied to the feminist movement resulting in the term “intersectional feminism” – the type of feminism that hooks and Lorde were talking about, before we had this term for it.

When used in the context of feminism, as in “intersectional feminism,” it is meant to specify a kind of feminism which recognizes that the bar is not set by middle-class or wealthy, able-bodied, cisgendered (identifying with the gender you were assigned at birth), straight, white women. It means this is a feminism that recognizes that Black women, queer women, trans women, differently-abled women, indigenous women, refugee women, women of color, poor women or women who have a variety of these and other identities, experience oppression or discrimination differently from women who do not share those same identities. It means, as a white woman, I don’t presume to understand or speak for all women, many of whom have different life experiences from my own. It means that when we reach equality for wealthy white women, we are nowhere near finished with the work of feminism.

One extreme version of feminists are TERFs. Trans-exclusionary radical feminists are an extreme group who deny the identity of trans women as women; they focus on genitalia and strictly-defined binary gender as prerequisites to inclusion in their feminism. The word “womyn” was originally used to eliminate the word “man” from the word “woman” and was often used by anti-trans and/or anti-men feminists. In more intersectional and inclusive feminist environments, the alternate spelling of “womxn” is often used, which signals an inclusivity to all who identify with the gender of woman or feminine nonbinary genders.

Running a business named “Feminist Oasis” means I am regularly reaffirming my commitment to the critical importance of intersectionality, and regularly communicating that our feminism transcends gender. More importantly, we reaffirm our commitment to these values with our actions, and do our best to bring them into every action we take and every way in which we show up in our community. You don’t need to read our propaganda zines (although we’ll probably hand you one anyway) – you can simply come to one of our events and you’ll get it. We welcome all genders to our events, meetups and workshops. We question practices in our businesses that are rooted in systemic oppressive systems like white supremacy. And we have fun! Having fun and taking care of ourselves is, in and of itself, a way of practicing sustainable alternatives to hierarchical power structures that use meritocracy-based language to convince us that we’re never doing enough. We prove those narratives false with actions as simple as taking an evening to learn how to paint. See? Fun!

Our feminism is an ongoing commitment, not a title or badge of honor. And it is certainly not a shield. When the word “feminist” is claimed in a defensive way, it raises a question of whether the word is being used to replace truly equitable practices and behavior.

As local feminist scholars Dr. Aria Halliday and Courtney Marshall expressed at our first Feminist Oasis event (a screening of Beyoncé’s “Lemonade” film followed by a discussion of feminism in media and entertainment), it is not very useful to argue about who gets to claim the term “feminist.” Your feminism, or feminisms, should speak for themselves.

What’s truly useful is to examine our practices and actions and see how they align with the values we claim to hold. Where we come up short, we hope our community will lovingly yet firmly hold us accountable. Because saying, “I am a feminist,” is not a replacement for acting with accountability.

I challenge those of you who recoil at the word “feminist” to take another look at feminism that welcomes you and is working toward equity for all. I challenge those of you who already claim the term “feminist” to consider how you define the commitment of your feminism – and see whether your own actions, in your business and personal practices, are integrated with these values.

This was originally published in the Sunday, July 29, 2018 print edition of Seacoast Sunday, a combined issue of The Portsmouth Herald and Fosters Daily Democrat, and online at seacoastonline.com: