Princess Out There — Interview with Michael O’Neill 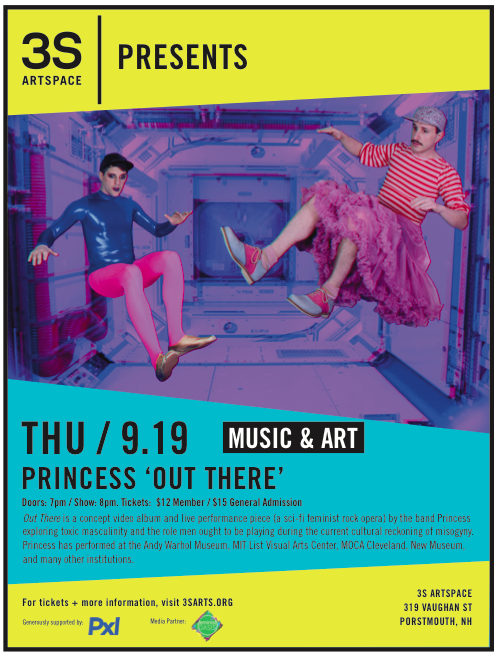 We recently got the chance to interview musician Michael O’Neill, of the band Princess, and talk about the band’s most recent project Out There. Princess stated making music again back in 2016, and after the election along with the influence of the Me Too Movement and the Womens’ March, both Michael and Alexis decided that their music needed to be more social justice and protest oriented. Michael says they took time, “to reflect on our thoughts and being men in this time, what we can do in response and in conjunction with the things were were hearing from women.”

He remembers back in 2008 when he was really questioning whether or not he could call himself a feminist. At the time he was in MEN with JD Sampson of Le Tigre fame, who he recalls telling him that of course he’s a feminist because he believes in the inherent equality of all people. During this tour with Princess, his feminism manifests in the way he pays attention to the women around him and in his immediate circles or the people he encounters. He is consistently checking, “am I in a situation where someone isn’t being heard because there are other men in the room talking louder? — and I mean that both literally and figuratively. And how can I aid in the effort of women to be heard better, and help remind men that this is something we need to be paying attention to?”

When playing their shows, it’s a pretty even split between women and men in the audience, but he says that he’s interested in the men in the crowd because he wants them to feel like they should include more feminism in their art. “I feel like the women come and they say thank you for doing this and thank you for making feminism a part of your creativity and your art. And I feel like for men, not a lot of men are doing that and that’s why I feel it’s important that we are because I don’t want gender equality to be something that just women need to fight for.”

By performing in art museums, Princess has created an atmosphere that encourages critical engagement and curiosity which is an intentional move on the band’s part. As Michael says, “Princess, we definitely defy a lot of boundaries both in terms of what we look like and the style of music that we play can’t quite be pinned between is it hip-hop, is it electronic, is it rock, and so there’s this queerness just all around. That’s what’s exciting to push people into a place where they’re not quite comfortable and see if they can get on board with some of the things that we’re talking about.”

Princess will be presenting Out There on Thursday, September 19th at 8pm located at the 3s Artspace in Portsmouth, NH.

More information about the show:

Out There is a concept video album and live performance piece by the band Princess. It explores toxic masculinity and the role men ought to be playing during the current cultural reckoning of misogyny. The video’s science fiction narrative explores the power of the Divine Feminine through collaborations with JD Samson, visual artist Jennifer Meridian, and the band TEEN.

Princess is a performance art duo that explores queerness and the concept of masculinity. Simultaneously gay, straight, queer, masculine and feminine, Princess embodies the fluidity and coherence between the seemingly contradictory. Alexis Gideon and Michael O’Neill are platonic soul mates, unified in their bond of not quite fitting in, who have been creating conceptual performances since 1999. Princess has performed at the Andy Warhol Museum, The Bass, Bemis Center for Contemporary Arts, MCA San Diego, MIT List Visual Arts Center, MOCA Cleveland, New Museum, Wexner Center for the Arts and many other institutions.

“With elements of rap, rock and pop, the performance will also have you dancing in your seat. Princess’ energy demands attention and will activate your senses. While the commentary in this show is serious, the experience is far from it.”
-Sara Lee Bund Nashville SCENE

By popular demand, performance art-pop psychedelic duo Princess (Alexis Gideon and Michael O’Neill) has launched a second tour of performances in support of the audio visual release of their sci-fi feminist rock opera Out There. Their recent 40-city museum tour included sold out events at the Andy Warhol Museum, New Museum, DePaul Art Museum and many others.