The lucky winner will be announced on Saturday, November 10. So, dear reader, if you sign up right now to become a Feminist Oasis member, you’ll be automatically be entered to win these tickets. Already a member? Then you’re already in the running!

For more info on the concert at 3S, check out this link.

Even if you don’t want to become a Feminist Oasis member at this time, we strongly suggest you buy tickets and attend this show. Not only will this be an amazing event, but Ladies of LCD Soundsystem have partnered with PLUS1 so that $1 from every ticket will go to RAINN and their work offering support to survivors through their 24/7 National Sexual Assault Hotline. Learn more about RAINN’s work here.

About Ladies of LCD Soundsystem: 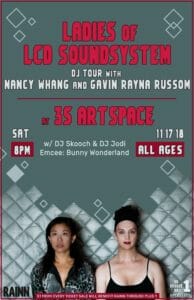 As the two women in LCD Soundsystem, Nancy and Rayna have worked with and contributed to the design of complex electronic rigs, in addition to building their portfolio outside of the band with a number of projects in diverse media, and as solo DJs who have played internationally.

Nancy and Rayna have been dedicated to various forms of activism over their extensive creative careers, and continue to provide a platform and visibility to marginalized voices with each stop of the tour featuring local women and non-binary artists as support. Ladies of LCD Soundsystem will also raise money for RAINN (Rape, Abuse & Incest National Network) via Plus 1 throughout the tour.

P.S. Two of our fave local DJs will be spinning tunes and supporting the Ladies of LCD Soundsystem Tour: DJ Skooch & DJ Jodi! 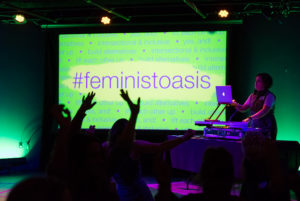 It’s been five years since DJ Skooch got behind the boards for the first time, and she’s now known as one of

the best beat-mix, re-mix, and mash-up DJs on the NH Seacoast. Skooch has provided the soundtrack for positive and progressive community-focused events such as Portsmouth PRIDE, TEDxPortsmouth, Concert Across America to End Gun Violence, & National Night Out.

Skooch loves partnering with local organizations making a difference in the Seacoast community, including Feminist Oasis, Sustainable Seacoast, and Vida Tortilla. Skooch has recently teamed up with The Wilder to provide “Beats with Benefits” – a benefit night on the first Wednesday of each month for local non-profits (beneficiaries thus far have included HAVEN and gather).

Skooch is also a regular guest DJ at Hubspot’s INBOUND Convention, DJ Jodi’s Women’s T-Dances, Bunny & The Fox Drag Shows, and Orange Theory Fitness classes. Most recently, she was the opening act for Thievery Corporation at The Music Hall and you can catch her every Wednesday night at The Wilder in downtown Portsmouth. 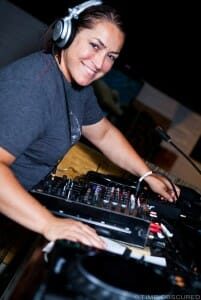 Born and raised in Dover, NH, Jodi began DJing 23 years ago and has since become one of New England’s most well-known DJs. In 1999, Jodi founded DJ Jodi Entertainment where she not only is a full-time DJ, but also oversees an army of DJs trained to execute any event.

As the headlining DJ at Hubspot’s INBOUND Convention each year, Jodi has had the opportunity to open for Janelle Monae and to play after-party events following performances by Amy Schumer, Judd Apatow, and 2 Dope Queens.