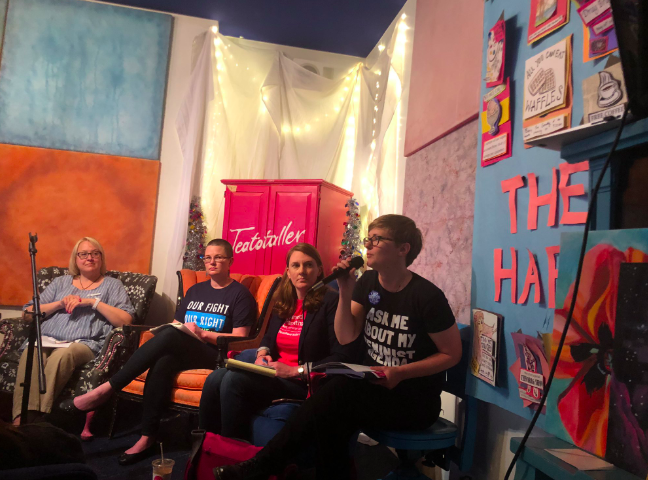 On Thursday, May 23rd, over 75 activists, legislators and interested community members joined together at Teatotaller in Somersworth, NH for “Tri-City Repro Justice for All” — an education and action event that brought together a coalition of partners including: Somersworth Democrats, Feminist Oasis, Planned Parenthood New Hampshire Action Fund, Joan G. Lovering Health Center, #Fight4HER NH of Population Connection Action and Equality Health Center.

Below are notes from this event (many thanks to Daniel Pontoh of ACLU-NH for taking these notes!)

TCRJ4A Coalition will be sending out an email every quarter with recommendations for actions across categories of: Time, Talk and Treasure. You can participate in our inaugural recommendations by visiting:

Panel of experts for information and tangible actions we can take tonight.

All here to support reproductive justice. Important to talk about language.

Repro Justice is used to recognize the historical marginalization that has happened. It’s not just white cis women.

People have fighting for these rights for generations. Lot of organizers, in particular black women and people in the South have been fighting for this for many years.

Overview of PPNE and legislative landscape of NH

VP of public policy for PPoNNE  – here tonight on behalf of the 501(c)4 side. Non-partisan organization, happy to talk to any group of any party about repro justice.

PPNNE covers ME, VT, and NH. She is focused on NH. We have five health centers in NH.

67% of patients are low income

Health Centers welcome ANYONE who walks through their doors.

Most proud of health care they provide. Judgement-free and gender-affirming

HER – acronym for health empowerment and rights. Work with all people (not just those who identify as “her”)

Campaign of Population Connection Action Fund based in DC

Has been going on for a year and half. Also in 8 other states across the country.

Campaign started when DT became president. On the third day of his administration, he signed into law expansion of the Global Gag Rule — a presidential policy that strips funding from international healthcare organizations that are non governmental in developing nations that provide reproductive health care and whole health care.

Global gag rule – makes a law that says these organizations cannot so much as say the word abortion to their patients without losing all of their US funding.

US has been largest funder of these programs globally.

With the gag rule, providers cannot even say abortion on top of not being able to provide those services. Only option is to continue providing health care to patients. Sometimes these places are the only health providers for many miles.

In response to this Sen. Shaheen wrote the HER Act. If passed would repeal the Global Gag Rule and reinstate funding that’s been taken away and change the law to make it so presidents woudl need congressional approval to reinstate the gag rule.

AM’s role is to work with new and experienced advocates to organize around repro rights, spread awareness, and grow the movement.

Brand new (2 wks) of the Joan G Lovering Health Center, an independent abortion care provider. There are two in the state (other is Equality Health Center). JGLHC is in Greenland.

JGLHC provides care for all sexual and reproductive health, and does a lot of STI counseling, testing, treatment and low cost contraception. Work on sliding scale for folks who don’t have insurance. Provides services to all genders.

LL worked 26 years in health care, had a great job but when saw the job opening she jumped at it.

If Title X gag rule applied to US providers, it would be a $70k hit for the JGLHC. Their budget would be decimated. They could choose to not accept the funding and try to survive but that would not be possible.

NH has an abortion clinic on Main Street in the capitol of our state. That’s a very positive thing compared to other states she’s talked to.

EHC is oldest abortion clinic in NH (now in its 45th year).

From Dalia’s perspective it should not be about exceptions like rape and incest granted to those who want an abortion — it should be about providing choice to anyone who does not want to be pregnant.

Been thinking and talking about situation in NH since Justice Kennedy retired not too long ago.

NH doesn’t have a lot of restrictions. We do have parental restrictions and Medicaid does not cover abortion.

If Roe were overturned today, nothing would change in NH.

Roe was a 7-2 decision in 1973 but has been so eroded over the years. We think of it as a symbol for Repro Rights but what Roe is now is not what it was in 1973. I don’t think that Roe should be our standard — lots of people have been left out of Roe. It excludes lots of people.

Some states of proactive stuff like NY and VT. NH has been thinking about all options and feel that we are in good position in the event that Roe is overturned.

NH gets federal and state funding for family planning.

Political and health care reality is not always aligned.

Lots of energy out there because of what’s going on in the rest of the country. For PPNNE they are always thinking about what’s best for access for their patients.

Quick follow up on not codifying Roe. Why don’t we want more laws on the books here in NH? What should we be pushing for?

Great and hard question. It’s not that we don’t want more laws. The Roe framework she personally wants to move away from. Roe framework invites limitations and excludes people. ex) medicaid not covering abortion is a huge problem and PPNNE is working on that. Under Roe, the right to abortion exists in name only. More laws on books may seem to be good and symbolic but we want to make sure everyone in the state has action to what they need and allowing Medicaid to be used for abortion is something we should fight for.

Is there another state that is about to do something bad that we should do something about? What’s the most important thing nationally we should care about?

Recently had a couple of clinics in ME, and ME just passed a law so that midwives can perform abortions. That’s good because lots of places are limited in who can actually provide abortions.

The way she sees nationally is 1) we have to stay aware. This can be exhausting and depressing and we should take care of ourselves but we need to come back to it. For too long some of us did too much resting and things got away from us. 2) we have to take action. Everything matters as CP was saying. There are different ways to be active like having convos with others, joining rally or protest, getting involved in community, getting job in field or advocacy. We need everybody who believes in this to be doing it.

Those who want to take these rights away, she doesn’t think they are the majority. We have to link arms and find a way to stay involved and active whatever that means for all of us.

Echo what AM said. We need to stay aware. She has cared about this issue for a very long time and for a long time thinks we might have been asleep at the wheel. Elected officials state and federal, need to know that the people care about this and believe it’s really important.

Have about another hour left. One resource they recommend people follow and a first high impact action.

We have lots of ideas for categories and levels on how you can get involved.

Action: Really important to thank legislators when they do good work. One action we’ll ask everyone to do is thank Sen. Shaheen for fighting for repro justice legislation at the federal level.

Action: PPNH Action fund. Get on email list and volunteer with us. People who are willing and able to share stories please  do share because they are so powerful.

Action: FIght4HER organizing summer activist institute. 13 week program from organizers with decades of experience training on skills to use on any type of social justice change. This institute focused on repro rights. Text fight nh to 58226 (?)

Action: We should be talking to everyone from our dog catchers to our presidents. Talk to folks running for any type of position who represent us about the importance of repro rights and what you want.

Wanted to make sure people felt like they helped have an impact tonight.

CP and ES saw that lots of folks were posting online and asking what they could do to take action. They wanted to make it more sustainable and last longer especially when we’re not all willing to come out on a thursday night.

If you have a camera on your phone to get it out, take a photo of our amazing panelists, take a picture of some swag on the coalition org tables.

If your phone has access to the internet: go to http://bit.ly/523action

Lots of actions need to be taken throughout state and country. If you want to take action tonight, ES is asking that you participate every quarter in 3 different ways (Time, Talk, and Treasure)

Tri-city Repro Justice for All will send email every quarter to ask folks to give one of their “T’s” every quarter.

Tonight before everyone leaves you have options:

Intention and goal to start an abortion fund in NH. NH does not have one and from her experience there is definitely a need.

Through her work at EHC taking calls from folks who need these services has seen there is a such a need for this fund.

Interested in starting a 501(c)3 to direct funds to all 3 providers in NH to cover financial gaps for folks who want abortions.

Looking for people who have experience in legal, financial, organizing and other realms.

If interested in being part of this groundwork chat with Josie!

Link to donate to SisterSong: https://sistersong.nationbuilder.com/donate

Some Tweets from the evening:

Taking action can be as easy as this: @crystalparadis is calling @SenatorShaheen to thank her for her comments on #reprojustice while I'm tweeting about #stopthebans#TriCityReproJustice4All pic.twitter.com/MNVd7pKcpU

Inspiring night at @TeatotallerTea with @PPNHAF @Fight4HERNH & Joan G Lovering center and a PACKED house discussing #ReproductiveJustice and healthcare access for all! Thanks @EmmettSoldati @crystalparadis and more for organizing!!!! #NHPolitics #youknowme pic.twitter.com/BtDBU6oK8g

What a turnout! Thanks @crystalparadis & Tri-City Repro Justice For All coalition for spreading awareness about advancing reproductive justice in New Hampshire! #FITN #NHPolitics pic.twitter.com/CRkQJ0TClJ

Tri-city Repro rights forum tonight talking about how to take action to stand up for #reprojustice and doing important the work! #nhpolitics pic.twitter.com/RgjCS4NAYh